President Theodore Roosevelt was invited by the Governor of Mississippi to go on a bear hunting trip near Onward, Mississippi on November 14, 1902. During the trip, Roosevelt was the only hunter who did not catch a bear. Roosevelt’s assistants cornered and tied a black bear to a tree. They called Roosevelt and told him to shoot the bear, but Roosevelt thought this was very unsportsmanlike, so he refused. This surprised everyone and quickly word spread through newspapers across the country. These articles were about a president who refused to shoot a bear but, not just any president but Theodore Roosevelt, the big game hunter. 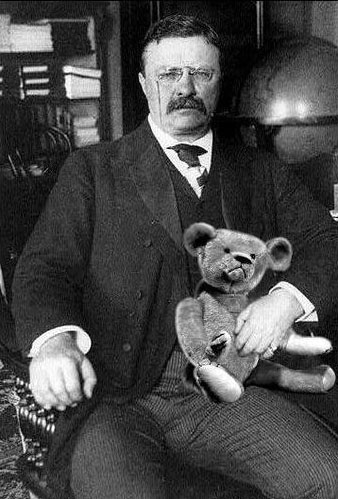 Clifford Berryman, a cartoonist read the article and decided to draw a cartoon of the event. His cartoon appeared in the Washington News Post, on November 16, 1902. A Brooklyn candy shop owner, Morris Michtom, saw the cartoon and became inspired. Michtom and his wife also made stuffed animals. They decided to make a stuffed bear and it became a big hit. He called it “Teddy’s Bear”. This is how the cute cuddly popular toy got its name.

Another story has the Teddy Bear being created in Germany by The Steiff Company.

Marguerite Steiff created a pin cushion which looked like a little elephant. So many people loved her pin cushion that she decided to turn it into a cute stuffed toy. Her brother began to sell them at a local market and soon they became an extremely popular toy. The Steiff stuffed animal business had started. Steiff began adding more animals to the business.

In 1897 Marguerite’s nephew Richard Steiff entered in the business. He sketched most of Steiff’s animals. He designed Bear “55PB” in 1902. “55PB” was the world’s first stuffed bear with jointed arms and legs. An American trader discovered this bear and bought 3,000.

The bears were a hit in the United States of America. From 1906 on they became known as Teddy Bears in honor of President Theodore Roosevelt.