According to Catawiki the most expensive Steiff bear are:

The Hot Water Bottle Teddy Bear has an opening in the front where you could place a tin hot water bottle. It did not sell much when it first came out in 1910. However, when one was found in 2010, no one had ever really seen one, so the offers at the auction went through the roof.

The Centre Seam Bear is a mohair bear that wears a silver brooch with the name Will on it and was made in 1908. During 2016, one was found in very good condition and sold at auction.

It is assumed that the Blue Elliot Bear was produced as a sample for Harrod’s, the British departure store. The blue color was one of six colors but sadly the bear never made it to full production. One was found in 1993 and was sold with an expensive price.

The blue and red split bears were manufactured in 1925. One bear was bought by Paul Greenwood who had quite the teddy bear collection. In 2010 he was convinced of fraud and all his bears were sold at auction. 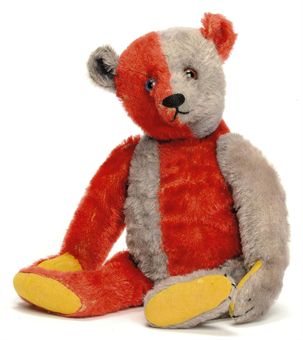 There were only 125 golden bears made, marking Steiff’s 125th anniversary. The fur contains golden threads and the nose is made with pure gold and as you can guess the eyes were made with diamonds.

The white bear might have been the oldest Steiff bear made. In 2002, one of the 1904 bears was found and sold during the Steiff bear festival in Giengen, Germany.

The brown bear made in 1926 was sold at the same festival as the PB28 Rod Bear. The Happy Teddy Bear was a simple, basic teddy bear made in two sizes one small (40 cm) and one large (65 cm). For such a bear, this price was rather extraordinary.

Only eighty-two Titanic Mourning Bears were produced in 1912 to remember the sinking of the Titanic. One of the original bears was found and sold in 2000 to the Puppenhaus Museum in Basel, Switzerland.

This female teddy bear came to fame when she was sold for €100,000 at auction. She was so highly priced, because of her amazing history. She was a gift to Bob Henderson when he was born. Henderson was a British colonel during World War II and he fought with his bear at his side.

The cute fashionable teddy bear is dressed in Louis Vuitton’s finest. With her designer style including her luggage, hat, and petticoat, she was bought at a charity auction in 2000 for almost 2 million euros in Monaco. Today you can pay her a visit in JeJu, South Korea at the teddy bear museum. This fashionista soars above the competition and is the most expensive Steiff

Now you now that some teddy bears are more expensive then cars and some houses.