Have you ever wondered the true stories of the two beloved bears from Peru and Hundred Acre Woods? Could you ever have imagined, that Winnie the Pooh was a real black bear or that Paddington was the last bear in the shop? These things are REAL!!!!!!!!!!!

On Christmas Eve 1956, 30-year-old Michael Bond, a BBC camera man and struggling writer saw the last teddy bear in a London spot. As soon as he spotted the bear he thought, “I can’t let that bear spend Christmas alone”. He took it home to his wife Brenda for a late Christmas gift.

“We were living in a small room – practically a caravan – on the Portobello Road… [A few days later] I saw the bear sitting on the shelf at home and wondered what it would be like if a real bear had landed in Paddington Station. I wrote down the first words without meaning to tell a story, but it caught my fancy and I carried on.” Michael Bond stated.

Bond finished his book in 10 days and went on to write 25 more Paddington books. All his books sold more than 35 million copies. His first book A Bear Called Paddington was published on the thirteenth of October 1958. After all his books became so successful, he left his job with the BBC station and became a full-time writer.

He also stated, “When I was small I never went to bed without a story. But, I doubt my mother ever pictured me writing for a living. In fact, when I eventually gave up working for the BBC in order to write full time, I think both my parents were worried that I had given up a nice, safe job for what sounded to them like a very precarious existence.”

On the other side of The Atlantic, another famous bear was to make his debut. When Lieutenant Harry Colebourn was returning from the military an unusual sight caught his eye - a black bear cub being held by a trapper who was eager to catch a buyer’s eye. The 27-year-old Canadian soldier was the perfect fit. Lieutenant Harry Colebourn loved animals and went to a veterinarian college. Apparently, the trapper had told him that he had killed the mother, but could not do the same to the orphaned cub. The bear caught his heart and he decided to buy the bear. The Lieutenant bought the cub for $20. He named the cute cuddly cub “Winnipeg” in tribute to his home town. Soon after, he decided to nickname the bear “Winnie”. Lieutenant trained Winnie with rewards of apples and a mixture of corn syrup and condensed milk. The cub followed him around like a puppy. Winnie became the regiments mascot. Lieutenant Harry Colebourn was called to the western front and he knew he could not bring Winnie and brought Winnie to her new home at The London Zoo, which had a new bear habitat with a realistic mountain landscape. Before parting, Lieutenant promised to come back for Winnie and take her back to Canada when the war was over.

The war was harsh and as soon and he came back Colebourn visited Winnie in her new home. Instead of a cub, she was now a bear and as gentle as ever. But the war was still not over and when it finally was, he reunited with Winnie. Despite his promise, he could not bring her back to Canada. He knew she was now London’s pet. After saying his final good bye, he returned to Winnipeg and opened a small animal hospital in the back of his house. 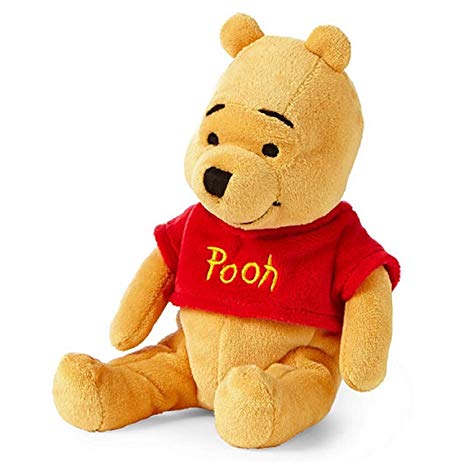 One day a boy named Christopher Robin begged his father to take him to the zoo. After his visit, he changed his teddy bear's name to Winnie the Pooh, a combination of Winnie’s name and a moniker he bestowed upon a swan he had fed in the morning. Christopher Robin loved his Winnie the Pooh and his other stuffed animals including Piglet, Eeyore, Kanga, Roo and Tiger. These stuffed animals gave his father, A.A. Milne, the idea for a books.

A.A. Milne was a prolific playwright, screenwriter, detective novelist, and a contributor to the magazine Punch. His wrote Winnie-the-Pooh in 1926 and the sequel The House at Pooh Corner was released two years later. The success of his books made Winnie even more famous than ever. When she passed away at the age of 20 in the year 1934, her death was heard around the world. Her skull was sent to the Royal College of Surgeons, where it was placed on display. Statues at the London Zoo and Winnipeg’s Assiniboine Park Zoo of Colebourn holding the hands of Winnie as she stands on her hind legs reminds us of a bond between a Canadian soldier and a black bear cub and how those best friends led to the beautiful literary classic Winnie the Pooh.